Heads of state and government take part in a meeting of the North Atlantic Council during the NATO summit at the IFEMA Congress Center in Madrid, Spain, June 30, 2022. /CFP

Heads of state and government take part in a meeting of the North Atlantic Council during the NATO summit at the IFEMA Congress Center in Madrid, Spain, June 30, 2022. /CFP

Editor’s note: Keith Lamb graduated from Oxford University with an MSc in Contemporary Chinese Studies. His main research interests are China’s international relations and “socialism with Chinese characteristics”. The article reflects the opinions of the author and not necessarily the views of CGTN.

The “NATO 2022 Strategic Concept” document published in coordination with the Madrid meeting of the North Atlantic Treaty Organization (NATO) details 49 key principles. With its language of “shared democratic values,” “peace and security,” “human rights,” “counter-terrorism,” and “transatlantic ties,” a casual reader might consider the document benign.

Nevertheless, to understand the intent of this NATO document, its polite diplomatic language must be tied to the harsh material reality of NATO. Despite the lofty rhetoric of the actor that is NATO, it cannot be ignored that this same actor carries a “big stick” that has been used for actions beyond the protection of NATO member states.

The document repeatedly mentions the “transatlantic bond” between the United States and Europe. This transatlantic link represents the geographical core of the neoliberal elite from the former Western colonial powers. Their power projection, based on naval power, followed a strategy to keep the interior of the world repressed and divided.

So under this strategy, Russia, which has been identified as NATO’s immediate threat, unless it’s in a Yeltsin-style mess, can only be an enemy. One could point the finger at Ukraine and say that “Russia is a real threat”, but this is not the opinion of Colonel Jacques Baud who worked on NATO projects in Ukraine.

Baud details how, according to intelligence from NATO member states, Russia was not arming the breakaway regions of Ukraine. Instead, the weapons came from the Russian-speaking Ukrainian armed forces that had revolted against Kyiv. He goes on to detail how, due to desertions, corruption and low morale, NATO, in conjunction with Kyiv’s armed right-wing militias, which were stepping up their bombardments against civilians in eastern Ukraine, combined with the threat of NATO’s eastward push, pulled the trigger for Russia’s actions in Ukraine.

The use of NATO to disrupt Eurasia’s development and security is not only transatlantic, with South Korea and Japan, it is also increasingly transpacific. If Japan joined NATO, then it would represent a shared military union of all the former imperial powers under the leadership of the United States. For South Korea and Japan, they would lose more of their autonomy and become stooges to prevent the rise of East Asia, which they profit generously from.

As BRICS countries move towards deeper financial integration, infrastructure development, technological cooperation and an open trade order, the course of world history is in favor of the forces of the Global South. Western Europe as well as Japan and Korea, by continuing to expand NATO, will eventually support forces that seek to maintain technological hegemony and separate economic blocs.

This world of separate blocs is an integral part of NATO’s ethos. “Interoperability” is one of the key features of its strategic concept. NATO members, who are required to allocate 2% of their budget to military spending, must purchase interoperable NATO weapons. As a result, Western Europe and especially the United States happen to be the main suppliers of these weapons. 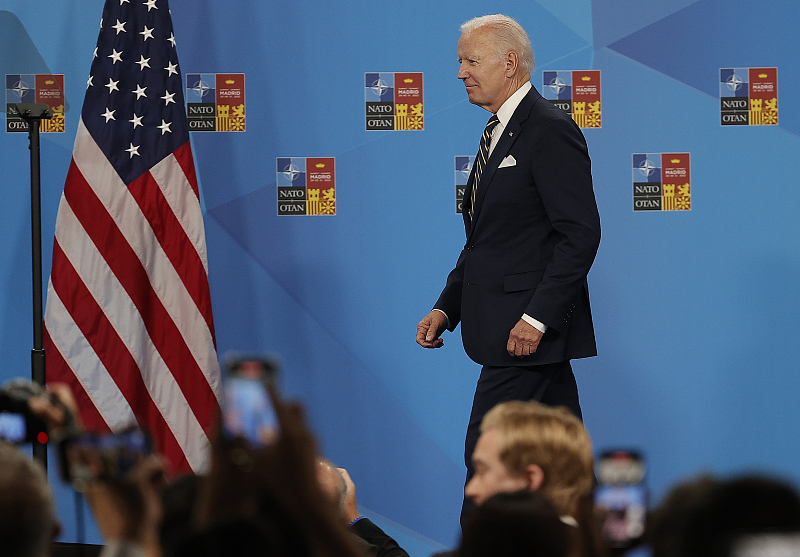 U.S. President Joe Biden holds a press conference on the final day of the NATO summit at the IFEMA convention center, in Madrid, Spain, June 30, 2022. /CFP

U.S. President Joe Biden holds a press conference on the final day of the NATO summit at the IFEMA convention center, in Madrid, Spain, June 30, 2022. /CFP

As such, NATO is a major force in the neo-imperial war economy where instability, threats and war are synonymous with profit. As the “Peace and Neutrality Alliance” has reported, this connection is evident in figures like Bruce Jackson, who in 1996 was vice president of strategy and planning at Lockheed Martin while simultaneously working on projects for the NATO, which prompted the states of Central Europe to join NATO. and to buy American weapons.

This pursuit of profit for the sake of peace and human rights goes beyond the mere immediate sale of arms. While NATO has played its role in plundering Iraq’s resources, its role in the destruction of Libya in 2011, which the Western media all too readily described as “intervention”, is even more obvious.

The fact is that under the guise of human rights and democracy, NATO acted to steal Libya’s resources and protect Western hegemony. Libyan leader Muammar Gaddafi had built Africa’s most prosperous state. However, his plans to create an African dinar backed by Libyan gold challenged both the US dollar and the Central African franc, issued by France. As the Cosmos Chronicle reports, Hillary Clinton’s personal emails linked NATO actions to this cause.

Libya’s failure led to the opening of slave markets and the destabilization of European societies flooded with migrants. With the rise of terrorist chaos, ISIL and Al-Qaeda have arisen in Libya. Already with the neo-Nazi shootings in the United States and New Zealand, looms the real threat that the same forces NATO backed in Ukraine are working to inspire white power terrorism in the West.

Given this, one wonders how serious NATO’s Counterterrorism Strategic Concept really is? Rather, it would seem that terrorism is only a strategic tool to maintain power. Proof of this is the US funding of Uyghur separatist movements that it previously bombed in Afghanistan. Furthermore, Turkey’s acquisition of Finland and Sweden’s NATO membership must have taken place after they complied with Turkey’s demands to suppress Turkish separatists.

The fact is that democracy as far as NATO is concerned is not true international democracy and non-sovereign interference. Rather, it is to use “big stick politics” and the imposition of a “democracy” designed outside the sovereign state that works for the protection of monopolies against global integration and world peace.