The next chapter in automotive isn’t just about new brands like Tesla paving the way for an electrified future. Brands burdened with the dulled prestige of their own heritage recognize that the transition to electric vehicles offers a golden opportunity to reestablish a new identity with young buyers. And nothing creates quite as much excitement as a captivating concept vehicle, something the Buick Wildcat EV Concept succeeds at a glance.

Buick says this concept represents the brand’s all-new design language that is expected to influence future Buick production models for the foreseeable future as the brand transitions to an all-electric future.

Announced alongside Buick’s plans to go all-electric by the start of the next decade and the unveiling of a refreshed emblem logo, this 2+2 coupe concept is a sculptural and elegant evocation of the Wildcat name, with a wide stance and nervous flex hinting at his great cat power. The Buick Wildcat EV Concept’s sloping roofline paired with a wrap-around cabin and abbreviated rear really accentuates the front of the vehicle, a beautifully expressed face in an industrial striped grille that seems to smile with menacing intent, an underlined impression by Bob Boniface, Director, Global Buick Design, who calls it a “vehicle [that] looks like he’s ready to pounce. 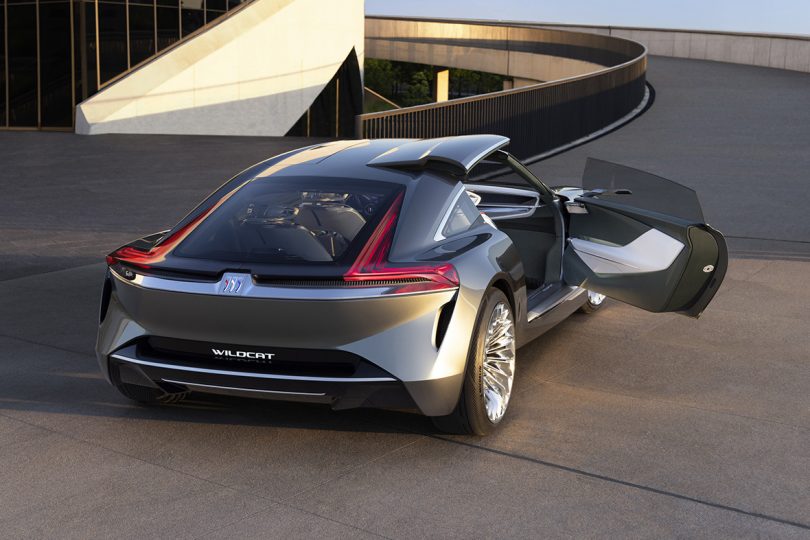 Wilder still are the doors of the concept. The roofline is marked in such a way as to hint at a T-top of sorts; instead, these section angles open up to provide a taller opening for exit. 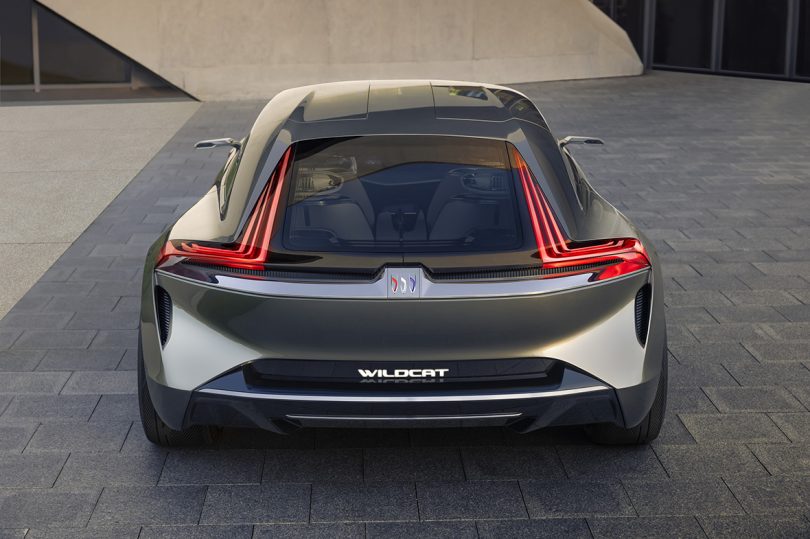 “The Wildcat EV concept represents the true future of design for the brand,” said Sharon Gauci, executive director, Global Buick and GMC Design. “Buick has always been forward-looking and this expression is a glimpse of the direction we are headed and the optimism we have for the limitless possibilities of an electric future.” 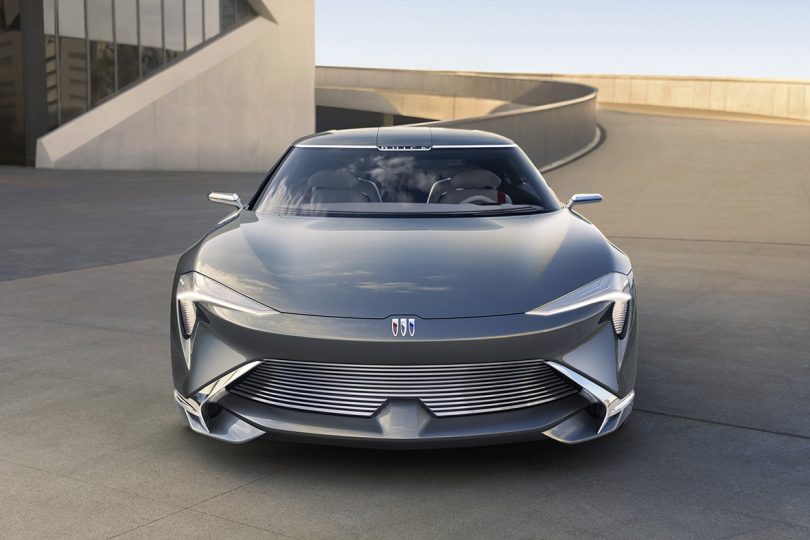 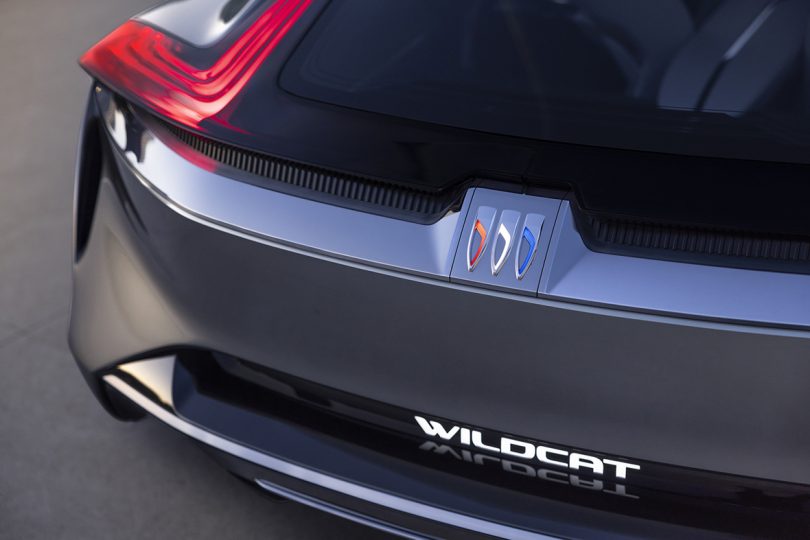 Ditching the circular badge logo, Buick’s new badge is the first redesign of the emblem since 1990. The three-shield design will be mounted on the front fascia of Buick products starting next year. 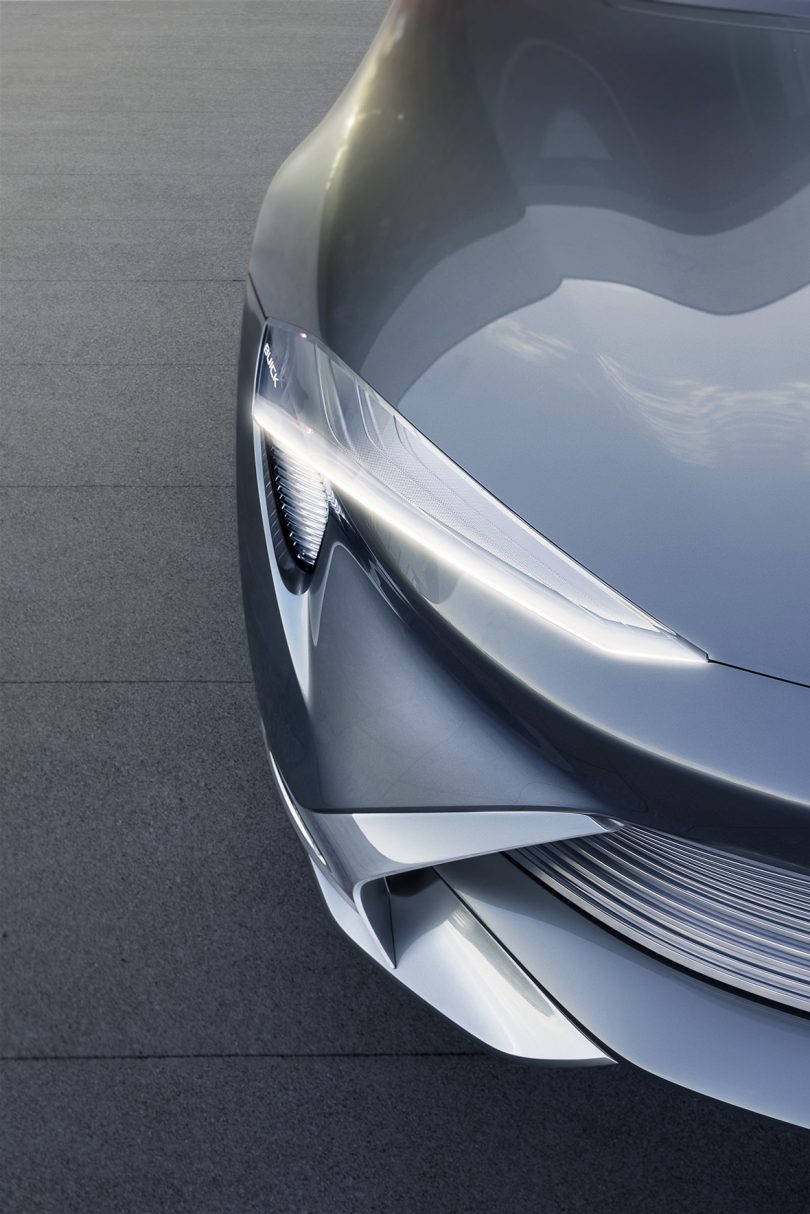 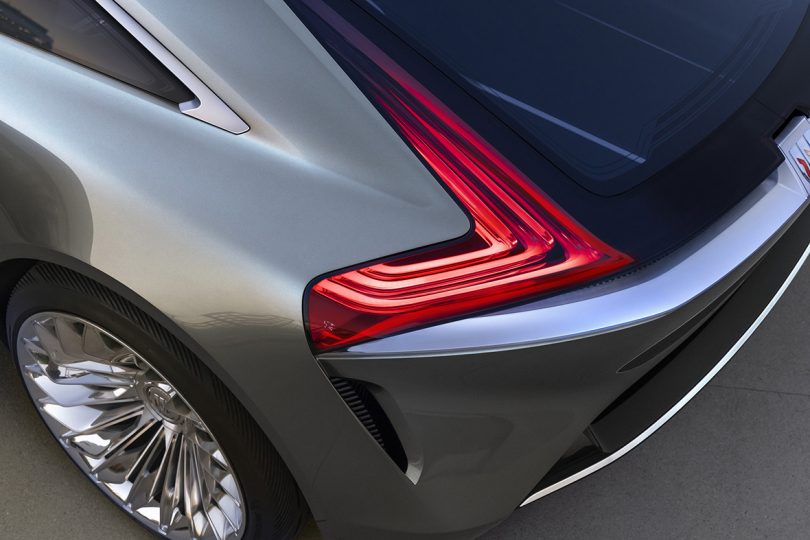 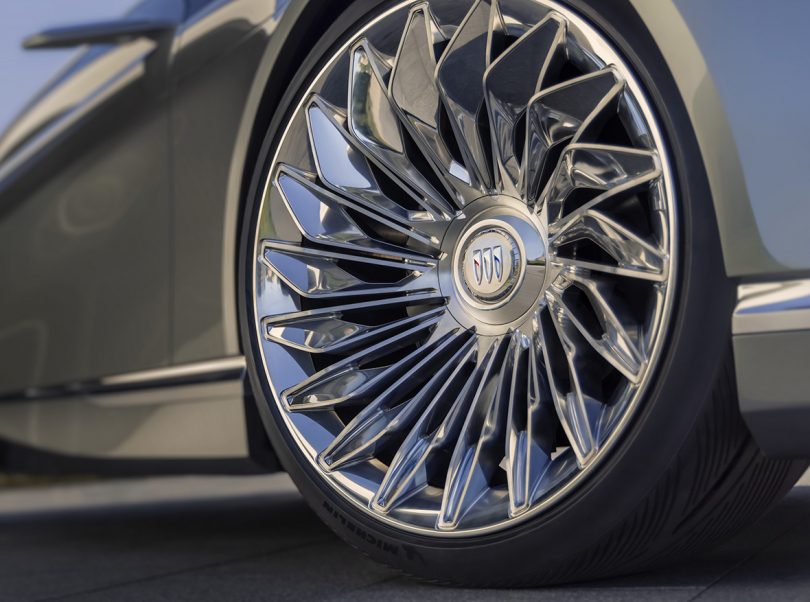 The 18-spoke “turbine” wheels of the Buick Wildcat EV concept are one of the details that nod to the brand’s Jet Age heritage.

The interior is no less spectacular, filled with all the varieties of tech and infotainment options one would expect from a marquee headliner concept, including a huge touchscreen to hold the drivers aware of relevant information. 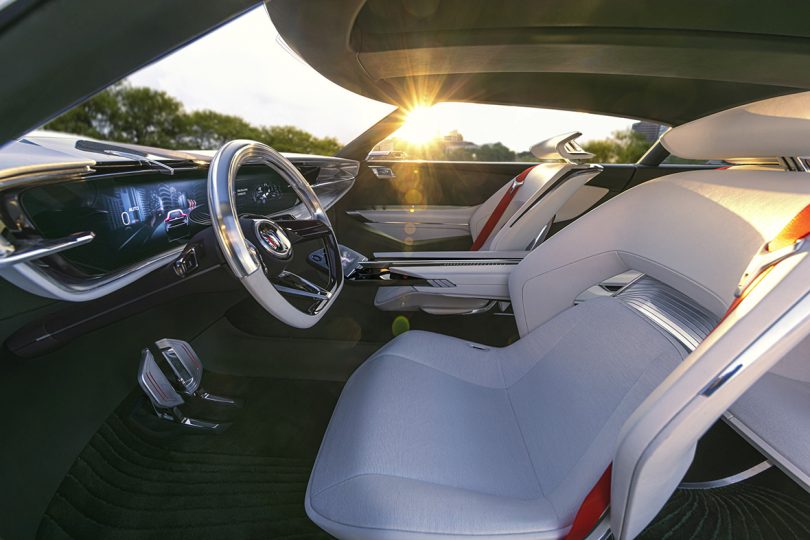 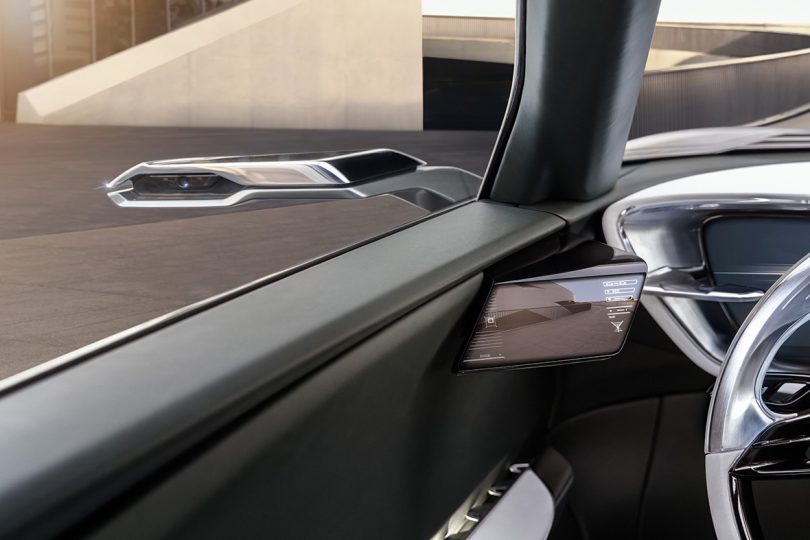 This being a concept, the Wildcat EV is also equipped with futuristic features such as artificial intelligence, biometrics and aromatherapy. The vehicle is designed to detect an elevation in the driver’s heart rate and will automatically adjust vehicle settings to calm it down. For example, when Zen mode is activated, the cabin lights turn off, an aromatherapy scent is released and the massaging seats activate to create an ambience of calm. 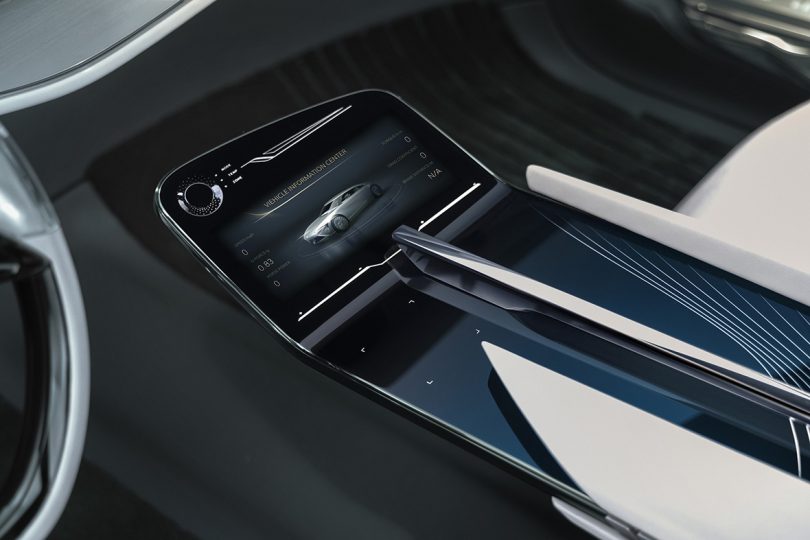 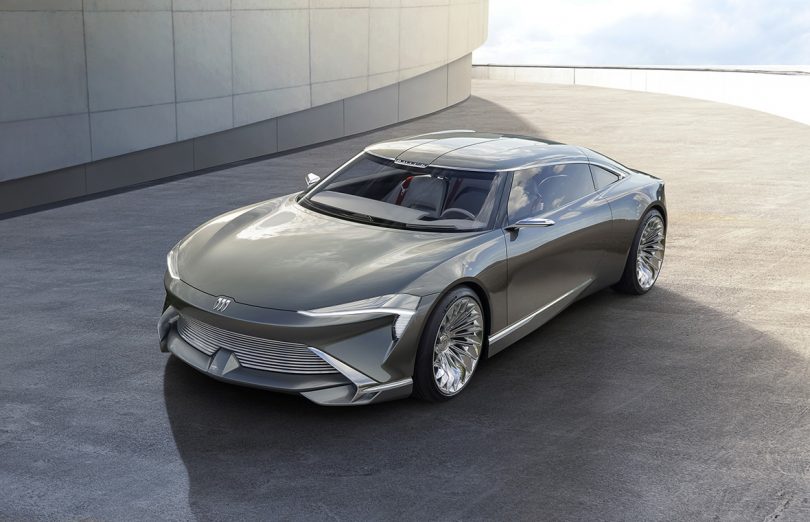 Of course, what Buick presents as a concept today in no way guarantees what we’ll see on the road tomorrow. The original wildcata model produced by Buick from 1963 to 1970, was a sports coupe also derived from a series of captivating Wildcat concept models it left many looking for its more expressive concept predecessors. And we still haven’t forgotten the sleek Avista we hoped/thought we would get, but never materialized. So while Buick once again grabs our attention with this futuristic Buick Wildcat EV Concept – because it’s absolutely stunning – the new design language should be translated seamlessly into production vehicles showing more than a hint here. , a suggestion there of what the Wildcat promises .

Gregory Han is Technical Editor of Design Milk. Originally from Los Angeles with a deep love and curiosity for design, hiking, tide pools and road trips, a selection of his adventures and musings can be found at gregoryhan.com.